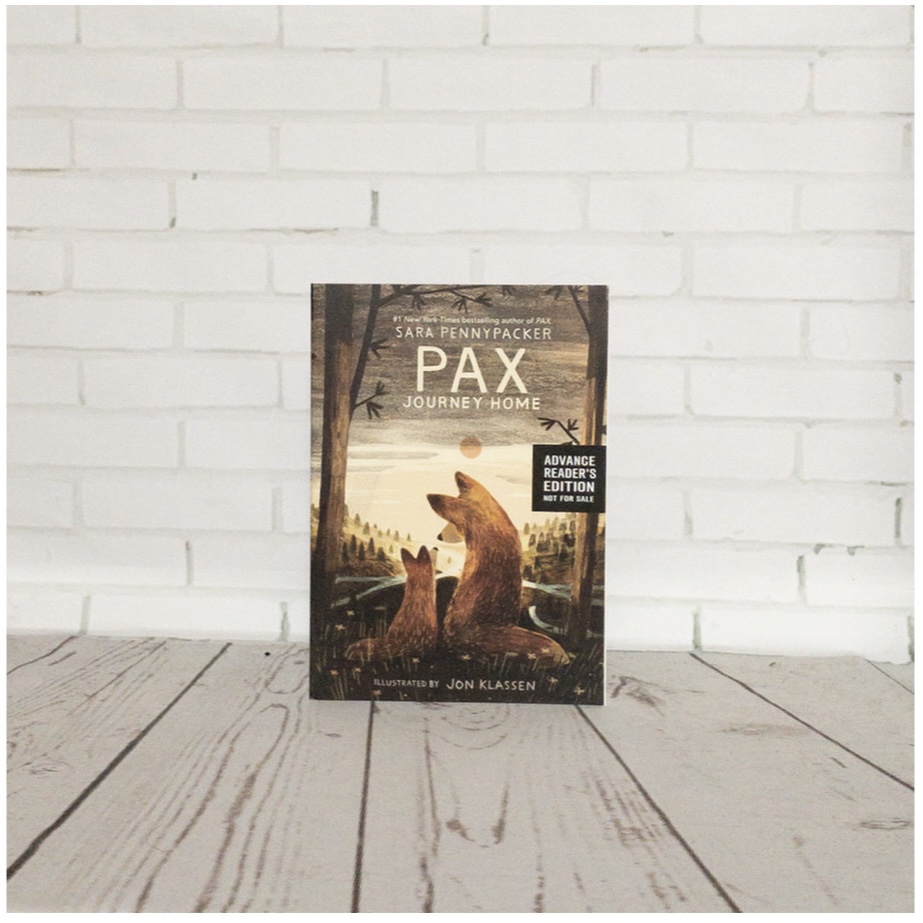 The Second book in the Pax series by Sara Pennypacker. Usually Illustrated by Jon Klassen

Synopsis: It’s been a year since Peter and his pet fox, Pax, have seen each other. Once inseparable, they now lead very different lives. Pax and his mate, Bristle, have welcomed a litter of kits they must protect in a dangerous world. Meanwhile Peter—newly orphaned after the war, racked with guilt and loneliness—leaves his adopted home with Vola to join the Water Warriors, a group of people determined to heal the land from the scars of the war. When one of Pax’s kits falls desperately ill, he turns to the one human he knows he can trust. And no matter how hard Peter tries to harden his broken heart, love keeps finding a way in. Now both boy and fox find themselves on journeys toward home, healing—and each other, once again.

I received an ARC from Harper Collins after the book was released as a gift.. and I was disappointed to see that the illustrations didn’t come in the ARC! I loved the illustrations in the first book, I think they add a lot to the story, and not having them this time —there were just big empty squares on the pages where the photos would be— was kind of a bummer. So I can’t review or share any thoughts about the illustrations or artwork in the second book because I haven’t seen them.

Just like the first one, I’m surprised that this is a children’s book. It’s such a dark story at times, there’s so much death and blood and war mentioned in the first few chapters alone! Never mind the poisonings and depression and countless other things that children probably might not even understand. I think the author should just bump up the storylines and the speed of the book a bit and publish YA or adult war books instead. I think that would be a much better fit for her.

The story was incredibly slow moving, it took forever to get to a conclusion that really should have been reached quite a lot faster. There was a lot of walking and what felt like pointless filler which made it feel really slow. However it is a kids book, so it still only took me three hours to read the whole book.

The characters are okay, I like Vola and a few of the other background characters. The main dude Peter is quite dramatic, I get it.. he’s lost everything. He’s sad. He’s depressed. He’s pushing everyone he does have left away. But honestly his actions and attitude make him just so unlikeable. Pax is okay.. he’s a fox so I mean, he sounds adorable and lovable and cute as all heck. So his chapters were fun.

I did like the way this one ended more than the first one, the first one was just so depressing when it ended.. at least this one ended on kind of a happier-ish vibe. These books just confuse me because they’re decent reads, but then I remember that these are meant for 8-12 year olds —that’s the age it says on the back of the book— and then my brain is like wow.. this is way too intense.

6/10 — because it’s labelled for kids and I really don’t think it should be. I don’t know, I’m conflicted. Maybe I’m just bitter that I didn’t get to see photos. Who knows.